Mature oocytes of mammals have the ability to reprogram sperm and somatic nuclei to produce new offspring or cloned individuals. During the maturation of mammalian oocytes, its epigenetic modification (such as DNA methylation) and chromatin status also change dramatically. However, the relationship between chromatin remodeling characteristics and DNA methylation and chromatin status in this process is not very clear. 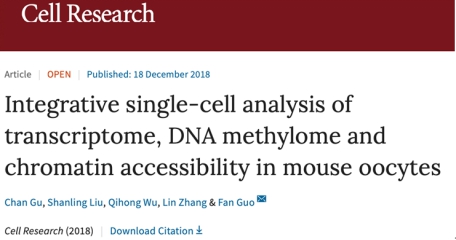 (1) In the process of oocytes growth and maturation, single oocytes undergoes drastic changes in chromatin state before and after the initiation of growth, and the transcription group also go through significant changes accordingly; however, the overall DNA methylation level of the genome is still below 5% before and after the initiation of oocytes growth, and there is no significant increase (figure below),which suggested that non-growing oocytes have unique gene ex-x-pression and chromatin accessibility. A diagram of the number and diameters of growing oocytes used at each stage.

(5) During the growth and maturation of oocytes, de novo DNA methylation often occurs in the Gene Bodies region. For these region, the promoter region of the corresponding gene is open as early as the non-growth oocytes stage; for the Gene Bodies region where initiative DNA methylation does not occur, the promoter region of the corresponding gene tends to be closed. It is suggested that there is a precise regulation relationship between the chromatin status of gene promoter, gene transcription and initial DNA methylation in oocytes.

(6) During the growth and maturation of oocytes, some of the epigenetic factors represented by histone modification-related factors will present stage-specific ex-x-pression; binding motif of Rbpj, which is a downstream TF of the Notch signalling pathway, showed significant enrichment. These results suggest that epigenetic and transcriptional regulation plays an important role in oocytes maturation.

Finally, the role of Notch signaling pathway, a key molecular signaling pathway identified by single cell multi-omics analysis, in oocytes maturation was validated by using small molecule inhibitors combined with vitro culture system of mouse follicles. By recording and culturing 364 mouse follicles in vitro, the researchers found that after treated with small molecule inhibitors targeted to Notch signalling pathway, the in vitro maturation of follicles was compromised, indicating an important role of Notch signalling during oocytes growth.

This study systematically depicted the precise and orderly changes of DNA methylation, chromatin status and gene ex-x-pression during the development and maturation of mammalian oocytes, as well as the relationships among various histological levels. It will lay a foundation for further research on the reprogramming ability of mammalian oocytes and provide a new idea for the improvement of somatic cell clone efficiency and the study of abnormal development of oocytes.